Last year I thought to myself: since my phone is just a computer running an operating system called Android (or Replicant!) , and that Android is based on a Linux kernel, it's just another foreign distribution I could install GNU Guix on, right? It turned out it was absolutely the case. Today I was reminded on IRC of my attempt last year at installing GNU Guix on my phone. Hence this blog post. I'll try to give you all the knowledge and commands required to install it on your own Android device.

Commands I give here might not work on your device. Any misuse of these commands can brick your phone, so be very careful.

First of all, you will need an Android or Replicant device. Just like any installation of GNU Guix, you will need root access on that device. Unfortunately, in the Android world this is not very often the case by default. Then, you need a cable to connect your computer to your phone. Once the hardware is in place, you will need adb (the Android Debugging Bridge):

Every Android device has its own partioning layout, but basically it works like this:

And that's it. Android's root filesystem is actually the initramfs so any modification to its content will be lost after a reboot. Thankfully(?), Android devices are typically not rebooted often.

Another issue is the Android C library (libc), called Bionic: it has less functionality and works completely differently from the GNU libc. Since Guix is built with the Glibc, we will need to do something to make it work on our device.

We will follow the binary installation guide. My hardware is aarch64, so I download the corresponding binary release.

Now it's time to start using adb. Connect your device and obtain root priviledges for adb. You may have to authorize root access to the computer from your phone:

Now, we will transfer some necessary files:

Note that some devices may not have /system/etc available. In that case, /etc may be available. If none is available, create the directory by using adb shell to get a shell on your device, then push the files to that new directory.

From that shell, we will install Guix. The root filesystem is mounted read-only as it doesn't make sense to modify it. Remember: it's a RAM filesystem. Remount-it read-write and create necessary directories:

Before that, you will need to find out what the data partition is in your system. Simply run mount | grep /data to see what partition was mounted.

We mount the partition, extract the tarball and move the contents to their final location:

Finally, we need to create users and groups for Guix to work properly. Since Bionic doesn't use /etc/passwd or /etc/group to store the users, we need to create them from scratch. Note the addition of the root user and group, as well as the nobody user.

Now we can finally run the Guix daemon. Chrooting is impossible on my device so I had to disable it:

To finish with, it's a good idea to allow substitutes from hydra: 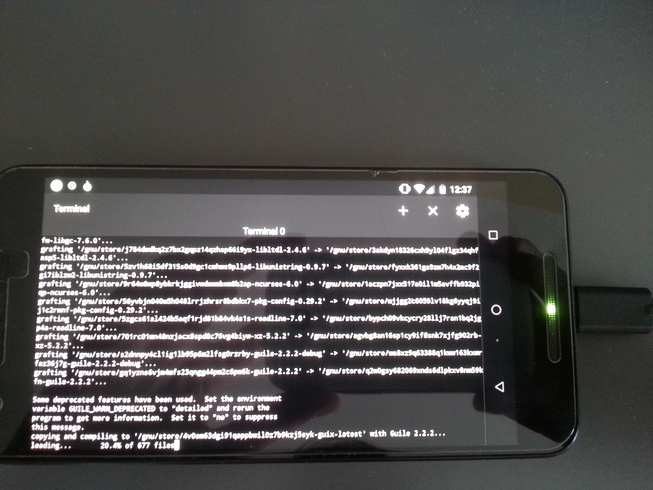 So, now we can enjoy the Guix package manager on Android! One of the drawbacks is that after a reboot we will have to redo half of the steps: recreate /var and /gnu, mount the partitions to them. Everytime you launch a shell, you will have to export the PATH to be able to run guix. You will have to run guix-daemon manually. To solve all of these problems at once, you should modify the boot image. That's tricky and I already put some effort to it, but the phone always ends up in a boot loop after I flash a modified boot image. The nice folks at #replicant suggested that I soldered some cable to access a serial console where debug messages may be dropped. Let's see how many fingers I burn before I can boot a custom boot image!

GuixSD can be used on an i686, x86_64 and armv7 machines. It is also possible to use Guix on top of an already installed GNU/Linux system, including on mips64el and aarch64.